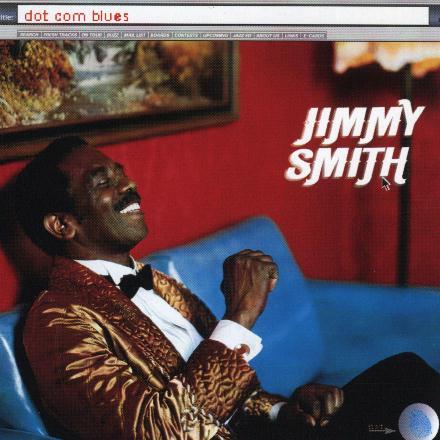 Nineteen ninety-four marks forty years for Jimmy Smith on the Hammond organ. Although he made the switch from the piano in 1953, Jimmy did not really find his voice on the organ until the following year. Woodshedding took place in the warehouse where he and his father worked as plasterers. Jimmy recalls: "I got my organ from a loan shark had it shipped to the warehouse. I stayed in that warehouse, I would say, six months to a year. I would do just like the guys do--take my lunch, then I'd go and set down at this beast. Nobody showed my anything, man, so I had to fiddle around with my stops."

After numerous trials with various draw bar combinations, Jimmy finally discovered the sound that he wanted. "I pulled out that third harmonic and there! The bulb lit up, thunder and lightning! Stars came out of the sky!" Jimmy emerged from that warehouse a new and different organist with a truly original approach and registration. His new sound would prove to be the standard for Jazz organists who followed.

Born in Norristown outside of Philadelphia on December 8, 1928, Jimmy revealed his musical talents early. He was playing stride piano by fourteen and performing with his piano-playing father in a dance team during the early forties. Jimmy sings as he speaks of his father. "My ol' man played the Old Town stuff. He was a D-flat piano player. He played a bass and the chord, yeah. Up in the morning out on the job, work very hard for my pay, but that lucky ol' sun. He was working when I wasn't working. Oh man, Daddy was working four nights a week--I mean making good bucks plus plastering in the day time."

Jimmy knew that he had to get out of Norristown. "I just got tired of it, man. I'd done everything: Boy Scouts, stock boy in the shoe store, wash windows (you know, office windows, pretzel factory), which was boring."

Jimmy left school in the seventh grade to help his dad who was having knee problems. Although he liked school (remembering biology fondly), he never returned and at age fifteen joined the navy. Coming out in 1947, Jimmy used the GI bill to attend the Ornstein's School of Music where he studied bass and piano.

Jimmy didn't read music and remembers how he cleverly hid this fact from his teacher. "She would play a thing by Brahms, maybe a minuet or just a little waltz, and she would say, 'Now James, you think you can read this?' I'd say, 'Yes ma'am.' I hated for her to find out I was just doing it by ear. She'd say, 'James, are you sure you're reading music?'"

Jimmy's innate musical talent soon became obvious to everyone there. Years later, Jimmy would find jam sessions in Philadelphia where he would play bump piano. "If you repeat yourself, you get bumped. Just one note or one bass line, one anything--you bumped! It was exciting not to repeat. It would make you think, think hard, man!"

In 1951, Jimmy joined Don Gardner's Sonotones playing R&B piano. Feeling confined, he began experimenting with the organ and went to see the then-reigning king, "Wild Bill Davis, at the Harlem Club in New Jersey. "Bill had everything goin'. Bill had extra, booming stuff in his speakers. He had the best stuff in those days, '50, '54, man. When you went to hear Bill, you could hear him down two blocks." Jimmy's organ recordings with Don Gardner reveal his initial "Wild" Bill Davis influence. "I copied off his style when I first started playing. And Bill Doggett style. Bill Doggett gave me another way of playing the pedals to relax your leg. Bill plays straight up and down, with his heel, not his toe, 'cause he told me the toe gets tender faster than the heel on the pedals."

A distinct new era in Jazz organ history was underway. Jimmy Smith's new sound utilized the first three drawbars and the percussion feature of the Hammond B-3 model newly introduced in 1955. Jimmy cut the tremolo off and began playing horn lines with his right hand, having been inspired by players like Coleman Hawkins, Don Byas, and Arnett Cobb. "I copped my solos from horn players. I don't listen to keyboard players. I can't get what I want from keyboard players," he explains. He did, however, admire friends like, Art Tatum, Bud Powell, and Erroll Garner. He created a new registration to simulate Erroll's sound on the organ (first and last four drawbars with the tremolo on).

Jimmy Smith became the organist everyone wanted to chase. Several players caught up but few received as much attention. Jimmy's career solidified, and this has been well documented. His discography alone would fill many pages. Jimmy Smith persevered in times when the Hammond organ looked like it was down and out. Numerous organ players dropped off the scene. High-tech keyboards, with their lighter weight and new sounds, forced many to abandon the mighty warhorse and carry newly fabricated organs around in their cars. Jimmy remained true to form despite all this.

The days of the old organ rooms might be gone, but the authentic Hammond organ sound (with the infamous Leslie tone cabinet) lives on in the nineties. Whether it's from the real source or a sampled, technological effort, the resurgence of this original sound is unstoppable. Credit should go where credit is due, and I, for one, think forty years of sermonizing deserves a hearty amen!